WHAT IS THE AGILITY?

Agility is a canine sport open to all dogs (whatever their race, with or without pedigree) that consists of making them overcome various obstacles in order to assess their concentration and agility. It is a sports and educational modality that aims to improve the integration of the dog with its owner and in society.

This sport was born in 1978 and has its origins in equestrian jumping competitions. It was an obstacle course, which had to be surpassed by the dog as directed by its handler. So much did the public like to see the dogs jump and run happily alongside their owners/managers, who directed them and gave encouragement throughout the tour, that this new modality crossed the frontiers very quickly. It has already spread globally, where Costa Rica is no exception.

This discipline implies a good harmony between the dog and its handler, which will result in a perfect understanding between them both. Therefore, it is necessary that the competitors have the basic bases of education and obedience. The AGILITY tour is not a speed race, but a competition of skill and dexterity.

What is it exactly? Under the orders of a guide, the dog completes a circuit where he must cross obstacles (about 20) in the shortest possible time and with the minimum absences. The tests range from jumping up and down fences, passing through tunnels and rims / rims, to zigzag through a line of posts or pass through a footbridge of 1.20 meters in height. 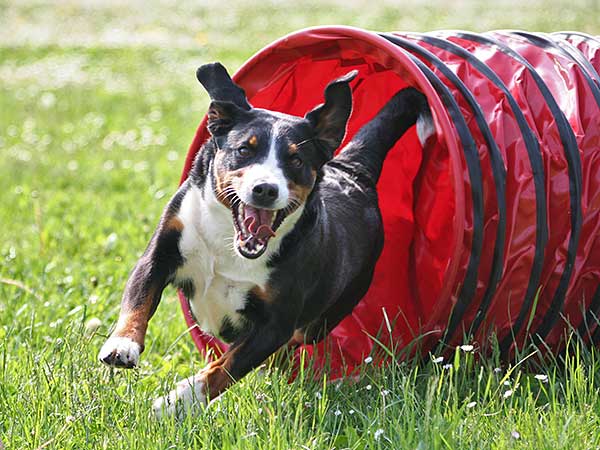 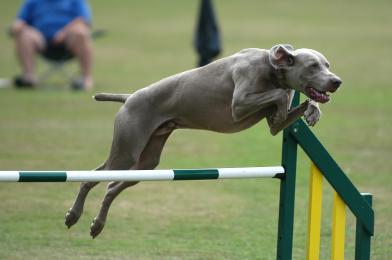 This discipline requires and demonstrates the good harmony between the can and its guide. Therefore it is necessary that the participants possess the basic bases of a good preparation in obedience and canine education.

Agility can be practiced in two ways: as a recreational activity, or as a professional sport, both modes are compatible. Practicing it in one way or another has great advantages; Since it is achieved that owner and dog enjoy together, practice physical exercise, share joys and misfortunes and get an education and obedience of the incomparable can.

Agility is undoubtedly an ideal method of dog education, obedience and sociability. For those who like the competition, nothing better, since in this modality the results are totally objective, as they will depend on the time and faults that occurred in the course.

Pets’ Paradise nowadays with 10 years of experience in the practice and teaching of this sport, we have the doors open so that you and your dog can start with us in the practice of this fun sport …!

OUR HISTORY IN THE AGILITY OF COSTA RICA

In 2003 Mr. Jory Freimann, who is currently the director of Pets Paradise, brought the first team of and organized the first and only Flyball Club of CR, thus initiates in our country the interest for this type of canine sports. Soon the idea arises of forming also an Agility club. With this idea in mind, our club PETS PARADISE AGILITY TEAM is created whose founders, directors and trainers are the team of Mr. Jory Freimann and Dr. Mary C. Marin.

Little by little dog agility was gaining adherents and more and more people were interested in practicing it. By 2004, the first unofficial agility events were already taking place in our country, although they were not officially endorsed by any organization, they helped a lot in the development of the sport.

Even so, those interested in participating in official competitions had to travel abroad. It is during one of these events in Guatemala where Mr. Freimann engages Mr. Kenneth Tatsch, who served as judge of the event, and invites him to come to our country to judge what would be the First Official Dog Agility Event. Mr. Tatsch agrees willingly, so that in June 2005 the first Official Dog Agility Tournament was held, endorsed by the Canófila Costa Rican Association (ACC) and supported by its then-President Mr. Alan Cukier.

After this first competition, Pets Paradise through its agility club PETS PARADISE AGILITY TEAM, establishes a close relationship with Kenneth Tatsch, Founder and President of the United States Dog Agility Association (USDAA), an organization dedicated exclusively to the sport of Dog Agility, and is currently the largest Private Agility Dog Association in the world (see Why we chose USDAA).

Taking into account the high level of development, organization and high quality standards of the United State Dog Agility Association, In February 2006, Pets’ Paradise decided to affiliate its Canina agility club, the PETS PARADISE AGILITY CLUB, to Organization. In this way a new stage in the agility of Costa Rica begins, counting already with official events of Agildad under the regulations of USDAA; these being the ONLY official events held in our country.

We have been organizing competitions, events and seminars for more than 12 years under our responsibility. With all this we have achieved the learning and motivation of all the participants and the delight of the public.

It is important to emphasize that during these events dogs have the opportunity to obtain qualifying points that qualify them for their possible participation in the World Games Cynosport that are realized each year in the USA. In the years 2006, 2007, 2012 and 2015, several dogs of Mr. Freimann and Dr. Marín have managed to qualify to participate and thus have managed to represent our country and such a prestigious Tournament.Pets Paradise has also held several USDAA Canine Agility Judge Training Seminars. Thanks to which Costa Rica has four Official Judges certified by USDAA; Mr. Jory Freimann, Ms. Carina Lundberg, M.Sc. Isabel Salas and Dr. Mary C Marín. Since then and in order to follow the development of this sport we have organized many other Seminars and Clinics of Agility Canine (see Seminars)

The years passed and the road has not been easy, but it is now almost 10 years of practicing and promoting this wonderful sport in our country. Thanks to the effort, persistence and professionalism of Pets Paradise, agility has continued to grow in Costa Rica. The PETS PARADISE AGILITY CLUB has continued to organize Official Tournaments, Training Seminars and classes where anyone interested in your dog can learn this wonderful sport.

Throughout all these years, our dogs have represented Costa Rica in numerous international events leaving the name of our country very high (See International Participations).

We hope with all our heart that this wonderful sport continues to grow in our country and through this page, keep you informed of the most relevant events of AGILIDAD CANINA IN COSTA RICA …

OUR PARTICIPATION IN INTERNATIONAL COMPETENCES

Our dogs have represented Costa Rica in numerous international events, leaving the name of our country very high. Among these events we can mention:

Our judge, Dr. MaryC. Marin has represented Costa Rica as an international judge in numerous international events. Among these events we can mention: